Tuesday night's ride on Cisco was a bit of a mixed bag of things happening. There were lessons going on, so I had to ride around the intermediate riders.

Cisco again started pretty good, with some try in reaching into the bridle. No complaints there.

Then I asked for a leg yield off the right leg. And got nothing. Nada. So we went back to the walk to reinforce what I was asking for.
The first attempt wasn't much better. Mr. Tappy had to make his presence known. We came around again to the open side of the arena. This time he made an effort. So I halted him, and gave him a treat.

I've not done that before. I've done some clicker training on the ground with him, but despite his general love for food, the clicker training has never seemed to be something that really engaged him. I wasn't really sure how this was going to work while under saddle. 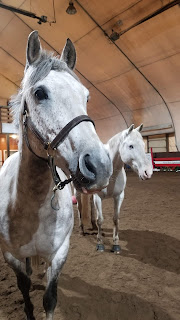 Our next leg yield attempt was at a trot. It was a really good attempt, so I clicked, halted, and dug out another treat for him. Next try - you better believe that he moved his body over when I put on my leg. I clicked again. He tried to slam on the brakes. I made him trot another few steps before allowing him to come back to a walk. I wasn't planning on using treats during work, so I only had a couple in my pocket. It looks like this might be a useful trick though, so I might have to start loading up!

Next, for mostly shits and giggles, I figured I'd try to ask for a walk/canter transition. I didn't really think we'd get it, but whatevs.

Sure enough, we didn't get it. There were a lot of trot steps between walk and canter. The good things were that he didn't get upset about it, and that he got the correct lead each time. That part was surprising.

Since I couldn't do as much canter as I was hoping (trying to stay out of the way of the lesson) I figured I might as well push things even more. I had someone drop a crosspole down to the weeniest crosspole in the world and trotted Cisco over it. That went well - he didn't have to actually jump it.

We moved onto a different crosspole. Slightly less weenie than the previous one, but not by much. It was also part of a gymnastic line (1 stride to 1 stride) with the other 2 jumps just poles on the ground.

This was slightly more worrisome to Cisco. We haven't actually jumped since I fell off over his head about a month ago. I figured he would still be worried about it, thus the weenie jumps. 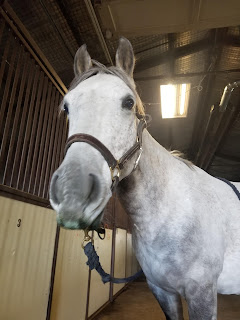 We did the line a few times. He didn't really have to jump it - he mostly just trotted over it. He was a bit worried and thought about exiting over the middle ground pole, but it got a bit better at the end.

I think my goal before moving the jumps up will be to be able to aim him at the weenie crosspole and be able to go over it on a loosish rein. This is definitely where taking my time to allow him to gain confidence will pay off.  I'd like to set up a few tiny jumps and do the thing where you pop over a couple and then do something else for a few rides. But I refuse to jump if no one is around, so it just hasn't been happening lately. I might have to start bringing Pony Grandma out with me so I can make some progress this year.