I promise that I'll have a post where I actually ride my horse one day soon. I had great plans for this week. Unfortunately, weather has been a bit of a hindrance.

A week ago Friday I dashed out to the barn after work to bundle the horses up in warmer blankets as the temperature was taking a plunge the next day. My drive home from work was fine. The promised winds picked up while I was getting changed. When I turned onto the secondary highway on my way to the barn, the wind was blowing the snow straight across the road from the open fields, and visibility sucked. It sucked so bad that there were 8 vehicles in the ditch on the 8km stretch of highway - three tractor trailers, one truck and trailer, and four cars. When I arrived at the barn, I was far more concerned about the snow that was piling up on the road to the barn, so I just dashed in, dragged each horse inside to swap their blanket, and chucked them back out again. Note that they were both perfectly happy standing outside in the snow and wind and probably could have cared less about the fact that I faced danger to make sure that they were toasty.

Then I had three days off over Christmas. I totally vegged the first day - I think it was the first day in almost two months that I nowhere I had to be and nothing I had to do.

I got out to the barn on Christmas Eve to stuff the ponies with their stocking treats: candy corn, mints, teddy grahams and ginger snaps. Santa did good on picking the treats this year, unlike last years selections of fruits.

Both horses also got a chance to go for a spin in the arena, which they both needed. Especially Phantom, who set off in a lovely canter, and then three strides later tucked her butt under her and turned on the turbo boosters. I had to stop her earlier than she would have liked because I'm worried she'll tie up again - there was still lots of energy in there.

Christmas Day was a wash since I had to do the family thing. So boring.

I had great plans to ride on Wednesday after work. The weather forecasters got the forecast wrong - it was -17 C on my way home from work, and since it's always a few degrees colder at the barn, my car read -22 C out there. Far too cold to ride. I just fed them and checked on Phantom's fat leg from Monday (which was better and of no concern).

The weather was supposed to be better this weekend, but again, the forecasters were wrong. We got way more snow than we were supposed to on Saturday, so roads sucked. It didn't warm up at all on Sunday, and it was windy -  it actually cooled off through the day, so the afternoon was -16 C with a windchill of -25 C. That's Netflix weather.

And now the weather is supposed to do the crazy prairie swing with a forecast of +2 for Tuesday. That's a swing of 22 degrees Celsius over a 36 hour period (for you US peeps, that the equivalent of going from -4 to 32 above). I actually have Tuesday and Wednesday off, so I really hope the forecasters are right this time! It might actually be tail washing weather. 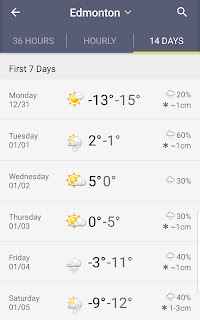 I have no plans for New Year's Eve (except eating the rest of the lobster) so I'm hoping to get out this evening to let them loose again so that I can ride both of them on Tuesday and Wednesday. Fingers crossed that the forecast doesn't change!